Markus studied theoretical physics in Jena and did his PhD at the MPE Garching and Jena within the SFB collaboration „Gravitational Wave Astronomy“ that also contributed to the LIGO consortium. During this time, he focused his research on observational constrains of the equation of state of neutron stars. Markus mainly speaks Matlab, R and Python but also worked with Fortran, C++, Mathematica, Turbo Pascal and Visual Basic. Occassionally, Markus gives courses for pharmaceutical companies such as CureVac, Merck or the Robert-Koch-Institute. 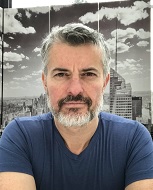 Hernán is our life science lecturer and joined QBM in February 2020. He graduated with a PhD in Genetics from the University of Cambridge (UK) and did his Postdoc at the Rockefeller University in New York (USA). He started his independent group at the CRG in Barcelona in 2007, and subsequently moved to the Helmholtz Zentrum in Munich in 2012. His main research interests are sensory biology, sensory-system development and regeneration.