The reductionists are represented by biochemists and biophysicists who work with well-circumscribed, often simple systems that perform a particular task, such as DNA repair, chromatin remodeling, translation and folding of proteins, or the degradation of RNA or proteins. They use structural biology (x-ray crystallography, cryo-electron microscopy) and single molecule techniques (super-resolution microscopy, atomic force measurements, magnetic tweezers) to understand how these molecular machines work at the highest possible resolution, down to the stochastic behavior of individual protein complexes. In a similar vein, synthetic biologists and theoretical biophysicists seek to create, understand and predict the minimal systems that are capable of producing emergent properties, such as pattern formation under normal and perturbed conditions. Eventually, of course, the reductionists want to know how their well-defined molecular machines deal with the complex mixture of substrates/targets present in the cell. 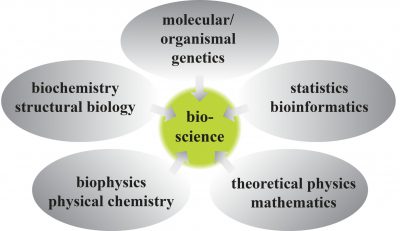 The holists are represented by biologists, medical researchers, and computational biologists. They work with complex biological systems as present in nature and seek to characterize specific processes, in particular regulatory networks and signaling pathways such as those involved in cell proliferation, death and differentiation or innate immunity. The objectives are to identify the participating components by genetic methods (forward/reverse genetics, RNAi, CRISPR), to track their physical interactions using genetic or biochemical, as well as a wide range of -omics approaches, such as next generation sequencing (DNase-Seq, ChIP-Seq, RNA-Seq) or proteomics (Y2H, mass spectrometry). By applying machine learning and pattern recognition methods aided by the power of high throughput experimentation, these researchers seek to generate quantitative mechanistic models which capture the behavior of complex live systems as realistically as possible.

Eventually, of course, the reductionists want to know how their well-defined molecular machines deal with the complex mixture of substrates/targets present in the cell, and the holists are interested in incorporating structural data into their models and in pinpointing the minimal system that will explain the cellular or organismal behavior. The ultimate goal of the research conducted within QBM is therefore to develop quantitative models that describe the behavior of complex biological systems with high fidelity and molecular resolution.